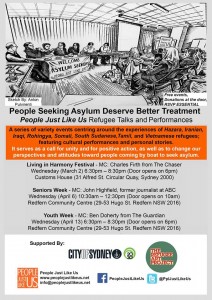 Speech by Professor Brian Owler, President of the AMA, on 21 February 2016 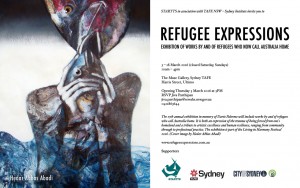 A great campaign – worth getting involved!

Read this exchange of emails to help understand why we have to keep working for change to a humane policy. Original email at the bottom; most recent at the top.

A number of refugee motions have been submitted by ALP Members, to be placed on the agenda for the ALP NSW Conference which will take place on the weekend of the 13/14 February 2016.  Labor for Refugees NSW has drafted a refugee motion which reflects our principle policies. It has also been submitted as a Conference agenda item.  A similarly worded motion was carried at the ALP Tasmanian Conference in August this year.  We are hopeful that this motion will be adopted at the NSW Conference.

I refer to Richard Marles’s piece on Nauru (“Activists’ rumour-mongering demonises and damages our friend Nauru”, 31/10). Marles argues that were the policy of offshore processing to end then asylum-seeker vessels would again set sail from Java and many asylum-seekers would die.
It has been pointed out to Marles that the answer to this argument is for Australia to increase its processing of asylum-seekers in Indonesia and admit those whose refugee claims are accepted. But Marles has continually ignored this response. To think that stopping the boats from departing Java solves the problem is to ignore the facts. Asylum-seekers in Indonesia can’t work and can’t send their children to Indonesian schools. If they choose to risk their lives by getting on a boat, it is because they do not consider that by remaining in Indonesia they are living.

Published in The Australian 3 November 2015